Bass Saxophone and the Modern Age

Bass saxophone almost certainly reached its peak in the first third of the 20th century. Before the use of electrified amplifiers that allowed the upright bass to fulfill the low-end sonic space in music ensembles, bass saxophone and tuba (or sousaphone) most commonly filled that role. Some musicians have told me that years ago a common instrument combination for a musician would be to play all three - bass, tuba, and bass saxophone.

This is exemplified nowadays by Vince Giordano, who plays all three. He leads a band that largely plays in the style of early 20th century popular music.

Prior to today, the most visible and possibly the most well-known soloist of all time on the bass saxophone was Adrian Rollini. Throughout the 1920's and 1930's Rollini had several recording hits and led popular and influential groups.

Harry Carney is considered by many to be the father of the baritone saxophone in jazz. He is reported to have been greatly influenced by Adrian Rollini's sound and playing. Rollini's final recording on bass saxophone was in 1938, and that is also around the time the bass saxophone disappeared from the mainstream.

Production of bass saxophones almost certainly reached its zenith in the 1920's. American saxophone manufacturers were dominant during this time. Selmer France did not really hit its stride until Conn and the other American saxophone makers were in decline during the late 1940's and 1950's. Though Selmer eventually became the dominant professional horn manufacturer, Conn and Buescher produced far more bass saxophones overall in the 20th century.

The onset of World War II really halted the production of American saxophones. There was strict war-time material rationing of brass and other materials used in instrument manufacturing. Many American factories, including Conn, were retooled to produce arms or military support items.

By this time, the bass saxophone was no longer a popularly used instrument. Largely due to changing tastes and to the invention of electric amplification - paving the way for the electric bass. Between the reduced popularity and production changes to factories, the bass saxophone would never again be manufactured in America on a large scale.

Check out this video for a good overview:

After its decline, the bass saxophone was still present in small niche ensembles. It found a home in ensembles playing period-music stylistically true to the 1920's, as well as some other areas of jazz.

In 1955 composer and conductor Leonard Bernstein wrote a piece titled "Prelude Fugue and Riffs". It is a composition of his intended to showcase aspects of jazz in a classical context. This piece includes a part for bass saxophone. You can watch that piece below, with Danny Bank performing the bass saxophone part. Bernstein also included bass saxophone very noticeably in his original orchestration for “West Side Story”.

The bass is prominent around the 2:35 mark:

A saxophonist today looking to expand their reach into the bass saxophone has a number of options equipment-wise. Many people seek out vintage instruments, often the American made Conn's and Buescher's. There are also French bass saxophones produced in the past as well as currently by Selmer and other companies.

Interestingly these have slightly different design concepts. Known as the French "Short Wrap" style and the American "Long Wrap" styles. This refers to the design differences of the upper portion of the bass saxophone and the length of the tube between bends.

New bass saxophones are now being produced by some of the the dozens of Asian saxophone manufacturers that have become prevalent in the last 10 years or so. Both less expensive models, and higher end ones as well. The short and long wrap varieties are both being produced.

In today's vast and divergent musical field the bass saxophone has a very small, but strong presence. Recently the bass has made some inroads into semi-popular culture. This is largely due to Colin Stetson.

Colin is a saxophonist known for his collaborations with popular indie-rock bands like Arcade Fire, as well as his solo saxophone work that involves a lot of extended technique for the saxophone. He has a large following and has released a number of solo recordings as well as having created numerous film-scores. Current practitioners of the bass saxophone include:

*As an added bonus, hear Andrew Hadro on bass saxophone. 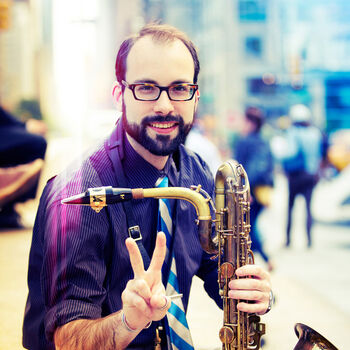 Andrew Hadro is a professional musician, composer, and bandleader in Brooklyn, New York. Hadro’s primary instrument is baritone saxophone, though he also performs on bass clarinet, Bb clarinet, and flute, and is one of the only working musicians in New York City to play the bass saxophone.

Recently, Hadro has been presenting compositions by current living composers through his ongoing project "For Us, The Living," An effort to honor tradition through innovation. Hadro has performed and recorded two albums for this series, with the most recent released in April 2018.

After 15 years in NYC, Hadro can be heard through an expanding discography and frequent live performances. He has played with and led ensembles large and small, featuring historical and modern styles, as well as through-composed and fully improvised music.

Born abroad in Mexico to American parents, Hadro spent most of his childhood in the Chicago area before moving to New York City to study at the New School for Jazz. In addition to working as a performer, Andrew Hadro is a product specialist for Vandoren, advising fellow musicians on equipment including reeds and mouthpieces. As curator of JazzBariSax.com Hadro provides resources and news to baritone saxophonists all over the world. During summers Hadro serves as a director and faculty member for the Litchfield Jazz Camp in Connecticut.