How and when did you get started in music?

My mother told me that when she was giving voice lessons to her students I would always listen to her singing while I was crawling around on the floor. For me my first composition teacher might actually be my mother. She would just make up random tunes and sing passionately with words like “What should I do I put too much salt”, or rewrite the whole folk tune and sing in her own way. Sometimes I would listen to her and laugh with my father. Sometimes I would join with canon and respond to her. My father wanted to join but he can only sing microtonally.

How and when did you start composing?

I was very introverted and timid when I was little. Having a giant cassette tape recorder in the room is really an amazing fortune for me as a kid to create an intimate and secured space filled with things I love. Around fourth grade, I would record myself humming along to the guitar strumming; I started to write short tunes (later they became pop songs) with an erased cassette tape. One day the tape was discovered by my mother and she encouraged me to pursue music.

What styles have influenced you the most in your compositional journey?

At one point in my life, I almost “accidentally” became a Mando-pop singer and songwriter. I went to Shanghai for a TV reality show as a singer songwriter. Because of this opportunity I became as an exclusive songwriter and worked with Linfair label company in Taiwan. I had been writing mainstream Mando-pop songs through out college and it is pop music that opened up the gate for my music journey.

I knew only that it was a departure for me to express something so personal in music, and also because I was curious to see if I could convey my emotional experiences adequately, both as a composer and performer. Also, growing up in a country with 56 ethnic groups (each ethnic group has their own folksongs and dances), such environment has been giving me so much diversity in both music and culture.

What is your process when you begin to compose a new piece?

I tend to generate a map (such as tension, energy) when I have an initial idea and the map might not end up being exactly the same than it was initially. I will spend lots of time on sitting in front of the piano with singing and improvisation, finding the ingredients that support the ideas, write down things I like, and answer myself how do they derive from each other and foreshadow something I have not seen. For me the map is as if I am driving a car in the darkness, and the front light only allows me to see several meters ahead. Though I might not know how to get to the destination from the beginning, I do need to know where the destination is.

Tell us what it was like to compose a piece for the Vandoren Emerging Artist Competition winner? Instrumentation, thought process, etc.

At first, David Gould and I were talking through the phone about this project. I was told that the piece will be premiered by the winner of the competition who is a really good college or graduate level saxophonist. I have kept a list for myself which includes all the potential pieces/projects/ideas that I want to achieve. I have been wanting to write for saxophone-cello-piano trio, and I haven’t recently written for saxophone. So this project is sort of unfolding these encounters for me to challenge myself in an interesting way.

What projects are you working on?

I have been working on a piece called Partial Men for string quartet, live electronics, and voice where I will perform with Aizuri String Quartet. The piece is dedicating to two deceased men who donated their kidneys to my mother, and to many other deceased organ donors who extend other people’s life and exist in the world in a different way. 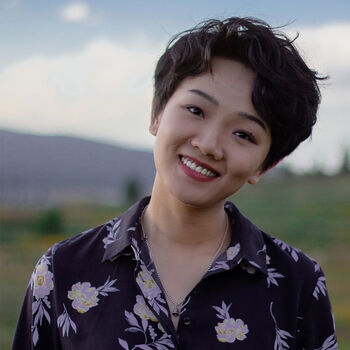 DAI WEI is originally from China. Her musical journey navigates in the spaces between east and west, classical and pop, electronic and acoustic, innovation and tradition. She often draws from eastern philosophy and aesthetics to create works with contemporary resonance, and reflect an introspection on how these multidimensional conflict and tension can create and inhabit worlds of their own. Her artistry is nourished by the Asian and Chinese Ethnic culture in many different ways. Being an experimental vocalist, she performs herself as a Khoomei throat singer in her recent compositions, through which are filtered by different experiences and background as a calling that transcends genres, races, and labels.

She recently served as Young-Composer-in-Residence at Music from Angel Fire and Composer Fellow at Intimacy of Creativity in Hong Kong. She has received commissions and collaborations with Utah Symphony Orchestra, Bang on a Can, Curtis 20/21 Ensemble, Lake Champlain Chamber Music Festival, Merz Trio, and the Rock School of Ballet in Philadelphia. Her compositions were broadcast by WRTI, Performance Today, WHYY, Radio Television Hong Kong, and Qinghai Television.

Wei has collaborated with the Chamber Orchestra of Philadelphia under the direction of Dirk Brossé for two consecutive years. As the opening of Chamber Orchestra of Philadelphia’s 2017/18 season concert at Kimmel Center in Philadelphia, she was commissioned and performed herself as the vocalist of the chamber orchestra work dedicated to Bernstein’s 100th anniversary. She has also performed her own compositions in various venues, such as New York City Electroacoustic Music Festival, International Computer Music Conference, World Saxophone Congress, and North American Saxophone Alliance.

Also active as a Mandopop songwriter and singer. She was the National Top 15 of My Show, Season 4, a reality TV singing competition in China. After that, she received her exclusive songwriter contract with Linfair Records Limited in Taiwan. Her music has been recorded and released on labels including Universal Music, Sony Music, Rock Records, and Ocean Butterflies International. Her works have been performed throughout China and internationally at venues including Sydney City Town Hall, Le Shadok in France, Onassis Cultural Center in Athens, Capital Indoor Stadium in Beijing, Nanjing Olympic Stadium, Dalian Sports Center Stadium, Tianhe Stadium in Guangzhou and Spring Cocoon Center in Shenzhen.