Compositions that Continue to Extend the Clarinet by Dr. Amanda Morrison

Welcome back for the final installment of “Eric Mandat’s Sound Worlds”, featuring the life and work of the legendary clarinetist and composer. For decades, Mandat has forwarded the capabilities of the clarinet and clarinetists with his experimental approach to composition. His unique combination of using rhythmic cells, tonal centers, folk and jazz elements, and extended techniques define his highly personal compositional language. During his tenure as the Professor of Music and Distinguished Scholar at Southern Illinois University at Carbondale, he has travelled the world performing, teaching, and discussing his works.

This final article outlines what Eric has been up to in the past decade. His creative output has been split between composing for himself and famous clarinetists from around the world as well as developing a new experimental genre of performing. From writing for the “President’s Own” United States Marine Band to performing in underground improv spots, Eric continues to profoundly impact the expansion of the clarinet repertoire and capabilities. Let’s explore some of Eric’s noted and newest solo, chamber, and ensemble works of the past decade.

WILY NONCHALANCE for Solo Bb Clarinet was written in 2020 and commissioned by Season Cowley, Eva Hagan, and Calla Olson. This six-minute piece reflects the lifestyle and actions of cats. You read that right! Mandat drew inspiration from pieces such as “Peter and the Wolf” and Scarlatti’s “Cat Fugue” and explores both the disengaged and then suddenly audacious characters of felines.

WINTER FANTASY for Solo Bb Clarinet is an eight-minute unaccompanied piece written to incorporate extended techniques into a high school level piece. Commissioned by Olivia Meadows, the work was to be based on the format and style of Wilson Osborne’s “Rhapsody”. Mandat was inspired by the season in which he wrote the piece, winter, and loosely organized it as fantasies are traditionally defined. While Mandat has no formal instructions about restructuring the piece in his manuscript, he did imagine the piece as being able to have sections extracted if doing so made it more accessible to a player. This option in combination with beautiful melodies, clear sections, and limited use of extended techniques (microtones and multiphonics) make this solo piece accessible to high school clarinetists and beyond.

DESPERATE MEASURES for Solo Bass Clarinet was written in 2019 and commissioned by Jack Liang. After 20 years since writing his last solo bass piece, Mandat was eager to explore what technical and extended techniques he could incorporate into this work. It seems that challenging elements are written into every measure; lending the piece its name, “Desperate Measures”. Written in several different sections and expressing numerous moods, the seven-minute piece will provide bass clarinet players with the opportunity to intimately know their instrument as they navigate the delicate multiphonic section and challenge their technique with this beast of a piece!

CHIRAL SYMMETRIES was Mandat’s experiment in testing his own capabilites on the Bb Clarinet. Written in 2013 during a residency at the Ragdale Foundation, Mandat sought to “test himself to the max” and to “see what the clarinet could do for me and with me.” The six-movement, twenty-four minute piece is packed with extended techniques and tests any clarinetist’s physical abilities on the instrument.

The work is based on the premise of chirality; the concept that two things can be the same but not map onto each other. He integrates this approach by flipping ideas throughout the music and employs the aesthetic thought that one may “encounter a situation that seems a certain way and encounter another situation that seems the same but can be entirely different or opposite.” This challenging piece is for clarinetists looking to expand their abilities and explore the intricacies of both the instrument and universe.

I. Stars Twinkle, Planets Shine – Tests the performers ability to create multiphonics in quick staccatos throughout the different registers.

II. Strings of Waves of Strings – Represents the oppositional imagery in the title by building strings in the upper partials of multiphonics in a repetitive way.

III. Dancing on the Light’s Edge – Is full of new three-note multiphonics that teeter on the edge of speaking.

IV. Origins – Mandat aimed to recreate the Turkish style of music and clarinet playing that influenced the movement.

VI. The Universe Stops Expanding Briefly to Offer Advice – This final movement is to be played as fast as possible, while circular breathing, and is filled with special fingerings to keep the music going!

TOGETHERNESS is an eleven-minute work commissioned in 2017 by The Scott/Garrison Duo, Shannon Scott (clarinet) and Leonard Garrison (flute). The three-movement piece represents how people can be together in small and large ways; exploring the flow of confluent and divergent energies. The first movement “Profound”, for Flute and Bb Clarinet, is filled with ethereal multiphonics. In contrast, the second movement “Quirky” is a whimsical movement full of twists and turns for the Piccolo and Eb Clarinet. The final movement, “Driving”, has each player taking turns leading the energy forward; indicative of the way we may move through life – sometimes taking the lead while following at other times.

THE BANGUI ANOMALY was commissioned to be a statement piece on social and/or political topics. Written in 2017, the nine-minute work was commissioned for Bb Clarinet and Bass Clarinet by the Egide Duo, Joshua and Stefanie Gardner. Inspired by the terms “alternative facts” and “moral compass”, Mandat wrote a set of variations based on a ten-note row that ranges in emotion from angry to bizarrely distorted.

In the work, Mandat sought to capture the uncomfortableness associated with the Bangui Anomaly in the Central African Republic. The area is considered one of the most dangerous and mysterious places in the world where an abundance of negative energy leads to strange occurrences such as compasses not working. The ten-pitch set is manipulated and reorganized, sometimes with pitches outside of the row, to create a rigidity in the order and a sense of themelessness that can be paralleled to the concept of “alternative facts”.

……..Eric has been commissioned by numerous music entities to compose music for their events or competitions, including DANSR. The following works were written for and premiered by some of the most celebrated clarinetists in the world:

PARALLEL HISTORIES: AN EXCURSION - Written for Jay Niepoetter and Jihoon Chang and "The President's Own" United States Marine Band in 2016. The nine-minute piece was commissioned by Jay Niepoetter for 4th of July weekend performances in Washington, D.C. The piece begins on two Bb Clarinet and ends on Bass and explore the history of the American experiment.

2 TEEZ - Written in 2013 is a twelve-minute work for B-flat Clarinet and string quartet. The piece was commissioned by DANSR for the Vandoren Emerging Artist Competition and premiered in 2014 by Tyler Marino.

PURSUIT OF HAPPINESS - Was composed for Rose Sperrazza and the Chicago Clarinet Ensemble in 2011. The eight-minute work is a Clarinet Sextet (Eb, 3 Bb, Basset Horn, Bass) written for three clarinetists couples: Stanley and Naomi Drucker, John Bruce Yeh and Teresa Reilly, and Rose Sperrazza and David Tuttle. Each movement highlights one of the clarinetist couples.

.........All of Eric's music is available for purchase on his website www.ericmandat.com. All of the mentioned titles as well as a few other chamber works and ensemble pieces from the past decade are listed.

As much as Eric Mandat is recognized for his contributions to the clarinet repertoire, Eric mostly considers himself a performer. What has he been performing in the past decade? Like his written compositions, Eric continues to evolve as a musician and performer. His curiosities and experimentation have led him to recently create music centered around electronics and improvisation. In contrast to living the life of a performing classical musician for many years, he now has been enjoying improvising in underground ‘basements’ with experimental musicians and bands for a change of pace. Five years ago, Eric also began to experiment with the manipulation of sound with the Ableton sound program, live clarinet, and an Xbox Kinect camera. With the camera translating body movements into sound, Eric is able to capture an even more expansive sound world to create in. While none of the works he has performed or created in this genre have been formally written, to be replicated, you can watch Eric’s improv pieces in action on his website. Included are links to some of these works, “Infinite Edges” and “Isoletudes” (one of nine pieces created during the 2020 pandemic quarantine). 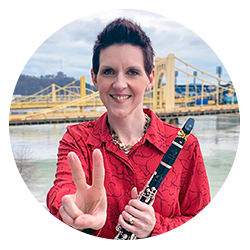 Dr. Amanda Morrison is on faculty at Slippery Rock University and a private studio instructor in the Pittsburgh area. She has served on the staff of Fairmont State University, West Liberty University, Florida State University, and Gulf Coast Community College. Morrison has given performances and lectures at the International Clarinet Association’s ClarinetFest, the NACWPI National Convention, the Music by Women Festival, the West Virginia Music Educators Association Conference, the American Musicological Society’s National Conference, and numerous universities throughout the United States. She is a founding member of the Milano Duo clarinet ensemble and the PM Woodwind Project (a flute and clarinet duo committed to sharing education-based chamber and solo music performances). Morrison has been a clarinetist with the Pittsburgh Symphony Orchestra, Westmoreland Symphony Orchestra, Tallahassee Symphony Orchestra, and Butler Symphony Orchestra. Having a strong interest in extended techniques for clarinet, Morrison’s research focuses on the music of clarinetist/composer Eric Mandat, publishing numerous articles on his life and works in the Clarinet Journal and NACWPI Journal. She is also a registered and licensed Music Together early childhood music teacher. Dr. Morrison earned a BM degree from Duquesne University and MM and DM degrees from Florida State University with her principal teachers being Mark Nuccio, Dr. Deborah Bish, and Dr. Frank Kowalsky. When she is not performing, teaching, or spending time with her family, she enjoys reading, traveling with her family, attending modern dance and movement classes, and indulging in vegan dark chocolate.

Read Part I and Part II