Finding His Voice at the VandoJam: A Conversation with Saxophonist Brandon Wilkins

Brandon Wilkins is a talented young saxophonist that has just recently finished his studies at Berklee College of Music. Brandon has been loyally attending the annual VandoJam at NAMM since he was 13 years old with just a couple years of playing under his belt.

Now at the age of 22, Brandon is an accomplished saxophonist with a distinctive voice. We recently had the chance to chat with Brandon about his experiences at the VandoJam and his development as a musician.

VandorenUSA: How long have you been playing the saxophone? Have you been studying anywhere?

Brandon Wilkins: I’ve been playing the saxophone for 11 years. I used to play percussion in the concert band, but I longed to play melodies instead. That’s when my parents took me to the music store and bought me my first saxophone, along with my promise to practice it everyday for at least 30 minutes. I then played saxophone in my local high school jazz band as well as marching band and wind ensemble. As my passion for jazz grew, I knew I wanted to pursue music for my career.

I attended the Berklee College of Music 5-week summer program and felt at home in the school’s atmosphere. I applied and was accepted with a scholarship. At Berklee, I studied with some amazing teachers including George Garzone, Jim Odgren, Rick DiMuzio, and Greg Osby. I just completed my studies at Berklee in the fall of 2015 with a Degree in Jazz Composition and Performance. 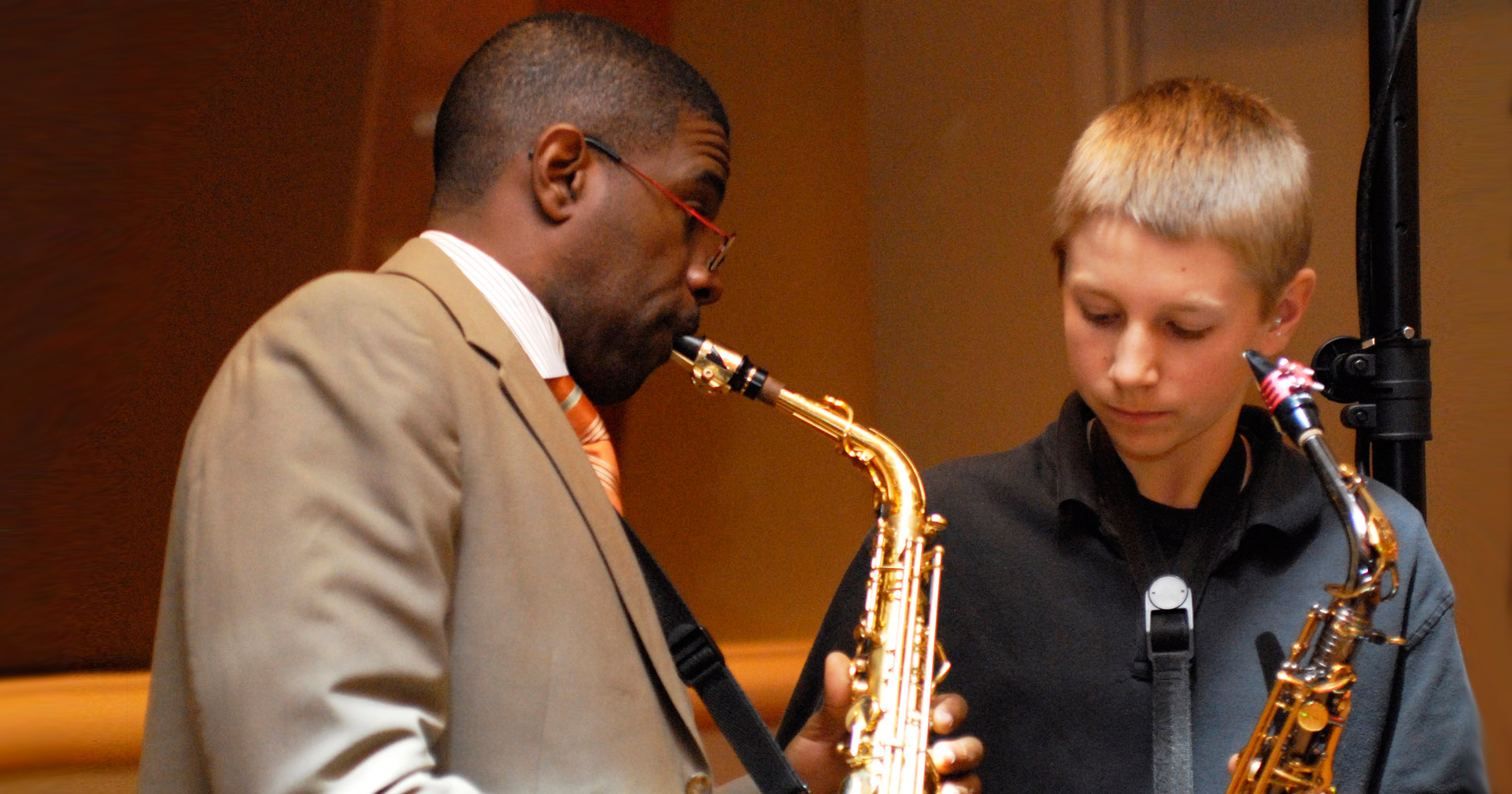 Antonio Hart and Brandon Wilkins at the 2007 VandoJam

You’ve been coming to the NAMM VandoJam for quite some time. How did you hear about it and why did you continue coming back?

BW: Yes, I’ve been coming to the NAMM VandoJam for a while now. My Dad found out about the VandoJam right after its first run and was disappointed that he hadn’t heard about it sooner. He took me the following year, and I had the privilege of meeting and playing with Antonio Hart. He was so kind to me and he took me backstage and taught me the jazz standard “On Green Dolphin Street” while the rest of the band was playing the head. As a young musician, I was so taken by his kindness and generosity of spirit. I may not even be where I am today without that experience. He showed me what jazz really means; a community, not a competition. (pictured above)

You’ve really grown as a musician throughout the years you’ve been coming to the jam. Do you frequent any other jam sessions or play with your own groups?

BW: I have grown up quite a bit both musically and personally since participating in the VandoJam my first time back in 2008. A big part of that was having a place to return to year after year like the VandoJam as a sort of litmus test for my progress as a player. I don’t feel like there are enough places to jam today, but they have been an integral part of my development as a musician. You can practice all day everyday in your basement, but you never know what is going to happen when you get up on stage with real musicians. That’s when you find out your strengths and weaknesses as a player and as a band mate.

I was so fortunate to have that opportunity when I attended Berklee. There are so many great musicians who want to play all of the time. Also, I frequent Wally’s jazz club in Boston for regular jam sessions. Outside of playing in jam sessions, I’m a part of a group called the Fireproof Collective and we play mostly original music around the Boston area. My current project, which is still in the works, is a quartet with 3 of my best friends and we’re playing more free form standards inspired by the Miles’ Second Great Quintet as well as Paul Motian and Kurt Rosenwinkel.

Who’s hosted the VandoJam during your time coming to them?

BW: Wow! So many great horn players have hosted and performed at the VandoJam since I started attending. My first time at the VandoJam, Eric Marienthal and Antonio Hart were hosting. Since then, Tia Fuller, Jerry Vivino, Bob Franceschini, Kirk Whalum, Gary Smulyan, and Bobby Watson have all hosted in various combinations.

It’s so inspiring not only to hear all of these great musicians play, but to share the stage and talk with them one on one. Every Vandoren artist has been very supportive of young musicians such as myself, and I’m grateful to have a group I feel very much a part of. Thank you Vandoren!

The New Los Angeles Vandoren Studio: What You Need to Know