I Am Not a Virus: Asian American Storytelling in the Covid Era

Jordan VanHemert is a Vandoren Artist-Clinician. We catch up with Jordan to discuss his latest inspirational album, "I AM NOT A VIRUS," which was recorded during the pandemic.

What was the motivation behind this project, “I Am Not a Virus?”

The initial inspiration for this album came from the fact that I had a group of musicians that I really enjoyed playing with in mid to late 2019. When the pandemic initially hit the United States, there were several reported acts of hate committed against Asian Americans--far more than isolated incidents. Specifically, according to STOP AAPI HATE, there were over 3800 incidents of discrimination against Asian Americans and Pacific Islanders (AAPIs) across the U.S. from March 2020 to March 2021.

As a BIPOC community, our stories are often sidelined for other narratives, and this record is my way of telling our story. I AM NOT A VIRUS is about documenting what it was like to be Asian American in 2020/201. Even now in March 2021, acts of violence continue. On Tuesday March 16, a 21-year old man shot and killed 8 people, six of whom were Asian women. Many media outlets refuse to call this a racially-motivated attack. With so much denial happening about the motive, I feel that it falls to Asian American artists to continue to bring awareness, and I am committed to using my limited platform as an artist to bring these issues to light.

We are not a monolith--my experiences do not speak for us all, but I hope that by sharing my own story, it can paint a more three-dimensional picture of who we are as people and what we contribute to society. By speaking out, I hope others will acknowledge and speak out against the threats to our community.

What did preparation for this album look like during the pandemic?

Preparing for this album was a bit tricky with rehearsals needing to be masked and distanced. For recording purposes, the distance often helps prevent bleed, so no worries there. I had also planned to book a tour around the album, but that was very condensed due to the restrictions.

In this album you mention the arrangement of the traditional Korean Arirang – what’s its significance in the album?

Arirang is an incredibly personal song to me. The two arrangements of Arirang are the most important songs on the album. Arirang is a song that Koreans hear and feel proud of their heritage and there are many regional variations. There was not a long time ago when people really just acknowledged the existence of China and Japan--now Korean food and culture (kimchi, gochujang, K-dramas, K-pop, etc.) is all very much in vogue. By interpreting this song--uniquely Korean--with jazz harmony and groove, which is uniquely American, I hope to express what it means to me to be Korean American.

"...that disappointment has been transformed into inspiration..."

How has the pandemic affected you and your performance career?

My career looks very different from just a year ago. I'm still teaching at Hope College, but we are exercising all safeguards in person and have moved our concert series to be entirely virtual. Any gigs I have these days have limited audiences, if that, and most are solely virtual. On the bright side, virtual masterclasses have allowed me to spend time with colleagues and their students around the country without having to incur travel costs. At the beginning of the pandemic, I was disappointed that the way we make music was fundamentally changed, but that disappointment has been transformed into inspiration from all of the creative ways in which friends are making music and working on creative projects.

Where can people listen?

Listen to Jordan's CD, "I AM NOT A VIRUS" on Spotify, Apple Music and Amazon Music. Listen here.

Arirang with the Jordan VanHemert Quintet

"I AM NOT A VIRUS" - Available Now 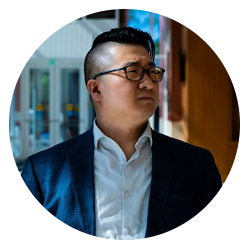 DR. JORDAN VANHEMERT is a Korean American saxophonist and composer lauded for his skill as a modern jazz improviser. VanHemert’s music—including his new album I AM NOT A VIRUS—is deeply informed by his political consciousness, employing his distinctive compositional voice to address issues of race and social justice.

VanHemert proudly asserts his Korean-American identity through his music, sometimes reharmonizing traditional Korean melodies into a contemporary jazz idiom. As the world grapples with racism and xenophobia—embodied by the unjust hostility toward Asian-Americans in the midst of a global pandemic—VanHemert fights back with the unflinching musical retort, I am not a virus.

VanHemert serves on the faculty at Hope College as Assistant Professor of Music Instruction in saxophone and jazz studies. He is also the Music Director of the Holland Concert Jazz Orchestra, a 501(c)(3) nonprofit organization dedicated to jazz advocacy, education, and performance. As an active composer, VanHemert has fulfilled commissions for ensembles across the country, including works for the Zenith Saxophone Quartet, Friends University Vocal Jazz Ensemble, the Bradley University Jazz Ensemble, Greenhill (TX) School Flute Choir, and many others. He holds degrees from Central Michigan University, the University of Michigan, and the University of Illinois Urbana-Champaign.

Teodross Avery on Defining His Sound