In the Face of Chaos: CD Interview with Vandoren Artist David Bixler

What inspired you to pursue a career in saxophone performance?

Career is a peculiar word to describe what I and many musicians do. I never sat down and thought about saxophone as a career. I had a passion for it-to figure it out and get better, and I have been doing that for many years. At some point, a musician must monetize some aspect of what they do in order to live, and so I have also done that. However, most of the playing opportunities that I have had have happened in an organic way, meaning they just happened rather than being the result of me posturing. I guess that posturing could help, and personally I could be more pro-active with the business, but the thought of doing that doesn’t ultimately move me. There are only so many hours in a day, and while I spend some time daily on the business aspect, I realize time spent promoting myself takes away from the pursuit of music and something has to give. The music is what motivates me.

Who are some modern Jazz players that would be of particular interest to students?

There are too many to name, but several saxophonists that I have recently interviewed for my podcast LINER NOTES are Joel Frahm, Scott Robinson, and Dayna Stephens. They are all unique and creative players that I admire, and they deserve to be heard.

"The music is what motivates me." - David Bixler

A recent press release highlighted this album as an artistic reemergence for you. Could you speak a little bit about the inspiration behind this project, and what the process has meant to you personally?

I have told the story many times-our youngest son suffered a traumatic brain injury at age three months, and roughly ten years ago, when he was seven his health took a severe turn for the worse. He was having seizures 24/7, most likely caused by scar tissue on the brain from the initial accident and because of this our entire family dynamic changed. He has had multiple brain surgeries and during this time my energy, our energy, had a different direction as we dealt with events that on one level are tragic. During these past ten years I was really treading water as a musician. This past summer however, I decided it was time to be a musician again, but in a repurposed manner. I made a decision to record In the Face of Chaos and Blended Lineage as well as start the podcast LINER NOTES. I feel that music now occupies a healthier place in my life. Music previously defined who I was and now it is more what I do. It continues to be part of who I am, an important part of who I am, but NOT the entirety of who I am. The title track, In the Face of Chaos combined with another tune on the recording, Hope sum it up; Hope In the Face of Chaos. This statement reflects an emotional and spiritual regeneration that is informing the music I am creating.

How did you meet Jon Cowherd, Ike Sturm, and Rogerio Boccato (the musicians in your CD)? Why did you choose these musicians?

I met Jon maybe 25 years ago at a church gig we used to do together. A lot of tired Sunday mornings, sometimes after being on the same gig the previous night at the Supper Club in mid-town-youch. We lived on the same block for a number of years and would do some sessions at his apartment and also play some gigs at places like the now defunct Detour where you could do whatever you wanted to do for no bread. He also taught my oldest son piano. I have enjoyed watching his career takeoff over the years with Fellowship and more recently his own band, Mercy Project. Rogerio I met about two years ago. New York is funny, because here is a cat (Rogerio) that is on the scene playing with a lot of people-doing some highly visible gigs, but I hadn’t met him or heard of him. Turns out that I had heard him on recordings like John Patitucci’s Remembrance, but I didn’t know it was him. Ike like myself is from Wisconsin and his father was an educator that I had met as a high schooler. We just knew a lot of the same people.

Why did I choose them? Sound and vibe. Discovering new music over the years has revealed to me facets of who I am as a musician that I didn’t know were there. On several occasions new ideas, new music, and new interests have prompted me to create a new outlet for the purpose of pursuing the new, and a new outlet is what Bixler, Boccato, Cowherd, and Sturm is.

When I met Rogerio. I was instantly intrigued by his sound. Even though he does play set, his set-up here is centered on the cajon and he occupies a different space which I think changes everyone’s role on the bandstand and allows everyone to explore different areas of the sonic spectrum. After initially playing with him and hearing him on other people’s gigs I started to imagine specific tunes of mine with his sound framing them. Jon and Ike both came to mind as I thought about music with a different type of transparency and vulnerability. Maybe a year and a half ago I set up a session to read some of my tunes with these guys, that ironically Rogerio couldn’t make, but we ended up playing a couple of gigs and then making the recording. I had fun-everybody is listening and down to try whatever. I feel that with these guys there is a focus on the music and an absence of ego.

"....my intention is that this recording somehow manages to convey the sense of hope that I have found in the face of chaos. " - David Bixler

What do you hope the listener takes away after listening to In the Face of Chaos?

Big picture I realize that one recording is of little consequence, but artistically I hope that a listener is moved by music that is both beautiful and spontaneous, and from a personal standpoint my intention is that this recording somehow manages to convey the sense of hope that I have found in the face of chaos.

Can you tell us about Blended Lineage?

I am super excited about Blended Lineage. It is a four-movement piece for nonet that musically represents four tribes or societal/familial groups that I have identified as being part of my make-up. In addition to existing as an audio recording the entire thing was filmed over the course of several sessions and skillfully put together by Alessio Romano at Studio 42 in Brooklyn. I just got all the videos back recently and he killed it on the production end.

It really represents everything that I have been trying to do as a musician, in that it is a platform that allows space for all the music and ideas that I find interesting and love. It is heavily composed music with space for improvising. It features great jazz musicians like trumpet player Mike Rodriguez and once again Jon Cowherd on piano. It also incorporates a string quartet that features the great solo violinist Judith Ingolfsson.

I am looking for an outlet for the project, so if anyone has any ideas, let me know!

Where can we find your album?

In the Face of Chaos comes out June 7th, but is available for pre-sale now on Amazon, iTunes and CD Baby. It is also available at the Red Piano Records website http://www.redpianorecords.com/releases/ 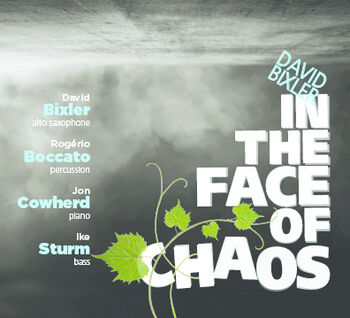 David Bixler's Latest CD "In the Face of Chaos"