What brought you to Mingus for this long awaited recording project?

Part of this happened in the early 70’s when I first heard the record “Mingus Moves". Not only did that recording capture me, it gave me something to help with the multitude of challenges and trauma I had endured in my life. This Mingus recording added a sense of “family” and “inner safety” to me in profound ways, and the sounds and spirits on that recording fused with the most important parts of me.

Flash forward to 2019. I almost lost my life the year before, in 2018, and for the next year and a half, I was fighting to recover. I didn’t feel like listening to music or playing… certainly not recording. In mid 2019, as I was recovering, I found myself suddenly feeling that I needed to record. Although I did not have a history of focusing on Mingus in recording or playing, recording a Mingus project was what came to the surface, bringing forth my love for Mingus from the 1970’s, and hence this project has been my life for three years now.

The band is spectacular, how did you choose the musicians?

The producer, Walter Smith III, and I, discussed many artists. After much research and discussion, this group of brilliant players and arrangers were decided upon. Not only were these artists individually perfect for this recording, but the combination of these artists were ideal. There could’ve been many different configurations and artists chosen, and they would’ve been just as wonderful. But this is what ended up being chosen, and I feel it was a “meant to be” decision!

What made you select these pieces to record?

Like everything else that had to do with this project, the artists involved had input. There were some pieces that I wanted to see come to life on this project, including some that had been on the album Mingus Moves that I first heard back in the early 1970’s.

Those pieces were “Moves” by Doug Hammond and “Newcomer” by Don Pullen, who played on that record. Some were chosen by arrangers, such as "Sue’s Changes" (chosen by Darcy James Argue), and “Goodbye Pork Pie Hat” (Fabian Almazan). “Duke Ellington‘s Sound of Love” was a suggestion from Walter Smith III.

There were so many Mingus compositions that it could’ve been impossible to choose, but the pieces that we chose came to the surface quickly. Peggy’s Blue Skylight and Invisible Lady are favorites of mine. So was Remember Rockefeller at Attica. Underdog was written by me, and because of the nature of this piece, was, to a degree, co-composed spontaneously with the quartet that played it… Kenny Barron, Christian McBride, Johnathan Blake and myself.

"There were some pieces that I wanted to see come to life on this project..." - Harry Skoler

How did you pick the different people to arrange the tunes for you?

This came from suggestions from Walter Smith III. After listening extensively to all of these brilliant artists, it was clear that we could hand over these pieces, and wait until the finished arrangement to hear anything, since we had complete trust in their artistry. To be able to have people collaborate, but take something on, so completely on their own, and not hear it until it had been completed…that was such a joy! We were in suspense, knowing each arrangement was going to be great, and then when we heard them, of course they all turned out to be phenomenal!

String quartet…. Really? It works so well with clarinet of course, but they are really integrated in the tunes too. I heard some violin underneath you in Remember Rockefeller at Attica, was this your first time recording with strings?

This string quartet really personifies Mingus’ personality in my opinion! The emotional depth from the quartet is beyond belief.

When I was improvising with the strings on Duke Ellington’s Sound of Love and listening back, it was clear that the brilliance of these players made it effortless to improvise, so that it felt like my playing had been written out beforehand, instead of improvised. But it was completely spontaneous. Music flowed very naturally from a subconscious level, and everybody played so beautifully that it made everything flow, very different from anything I had experienced in my life.

I had recorded on a project with strings before. In 1999, I released the record A Work of Heart. This was arranged, played on, and produced by jazz pianist Donn Trenner, who played with Charlie Parker, Chet Baker, Ben Webster, Stan Getz, Gerry Mulligan, Nancy Wilson, Les Brown, and a multitude of others. That recording gave me some experience with a project that involved strings with many concepts and configurations.

The news reports played during that tune are so powerful, who’s idea was it to include them?

Fabian Almazan, who arranged Remember Rockefeller at Attica, introduced that to us! I think it’s breathtakingly powerful. The digital version has this, and the CD and vinyl version (the vinyl version being released in September) are without it. The piece works both ways, and it’s wonderful to bring both versions to the listener.

"Everyone involved came from a place of love, personally and musically..." - Harry Skoler

How did the recording session go? If I remember correctly it was one day, true? How were you able to get all this done so fast?

I think that it was the right thing at the right time. A kind of magic.

Also, between all of the artists, Sear Sound, and Walter Smith III as producer, everything came together wonderfully. It was the perfect collaboration, and I feel so blessed to have had a small part in it. It was a total of four days.

In my opinion, it was a timeless experience. Everyone involved came from a place of love, personally and musically, which contributed to a relaxation and camaraderie throughout the session. The expertise from the players, arrangers, producer and engineering brought a session that moved with precision and creativity!

Tell us how you prepared for this project? What types of studying and rehearsing did you do? Please tell me this was rehearsed before the record date.

The string quartet had rehearsals before the date. When we came together, a few pieces (with everyone) were rehearsed in studio, but many were not. Some were recorded on the first take. We didn’t rehearse as a complete group beforehand. Everything came together beautifully! Perhaps not conventional wisdom, but we went with our instincts.

Preparation for this project took place over two years. For myself, it involved listening to a multitude of recordings, rehearsing with small groups before I went to New York to record, and spiritual preparation. I cannot speak for the other musicians and arrangers in regards to how preparation took place for them, but I have no doubt that each person individually, and together, had prepared masterfully, so that on those dates of recording all were ready to let the music take them where it needed to.

What is your Vandoren set up?

How many reeds did you use during the recording date?

One for the first two days, one for the next two days. My daughter‘s a jewelry maker, and I’m going to have them both turned into necklaces. Both reeds had personalities (truly!)

Do you have some live performances lined up for this project, when and where?

These are to be determined. Planning to have some in New York and Boston, and then see what develops with single dates/touring.

The early reports and reviews have been great, how’s the record doing? Which comments about the album have stood out to you?

Very excited to see so many people interested in this recording! Today the NACC (North American College and Community Chart) has Living In Sound: The Music of Charles Mingus in the Top 10 at #2. JazzWeek has the record at #16 on the Top 50. There are hundreds of stations nationwide and internationally playing the music. Very honored to be included in features about Mingus in Jazziz and JazzTimes.

The comments about the album were focused to a degree on how the group connected with Mingus’ perspective and artistry. That was very satisfying to read. 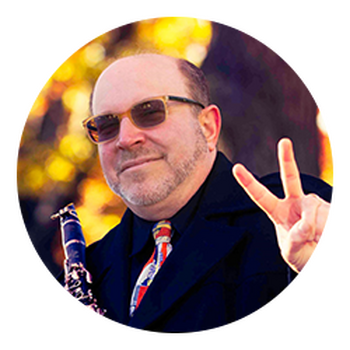 Jazz clarinetist Harry Skoler is Professor of Woodwinds at Boston's prestigious Berklee College of Music. He received his Bachelor of Music degree from Berklee in 1978, and a Master of Music degree from New England Conservatory in 1986, where he studied with legendary jazz great Jimmy Giuffre. His recordings include Conversations in the Language of Jazz, Reflections on the Art of Swing - A Tribute to Benny Goodman, A Work of Heart on Brownstone Recordings, and Two Ones on Soliloquy Records. In addition to touring with his own group, Skoler reaches young people with the educational ensemble "Adventures With Jazz". To learn more about Harry Skoler, visit www.harryskoler.com

Listen to Harry Skoler's Album - Living in Sound: The Music of Charles Mingus