The Bach Cello Suites on Bass Clarinet: A New Voice for the 21st Century

What drew you to recording the Bach Cello Suites?

I didn’t actually start bass clarinet until my Master’s at Yale. My teacher, David Shifrin invited a great bass clarinetist from New York, named Dennis Smylie. He did a masterclass for our studio and performed the Prelude to the 1st suite. (the movement everyone knows!) I was in awe of the sound and lyrical quality he produced on the bass clarinet. I had always thought of the bass clarinet as a weak, auxiliary instrument in the orchestra, compared to the clarinet. Hearing Dennis made me realize how special the instrument could sound when played well. I took a number of lessons with him, and he helped me learn how to play with this kind of warm, dark, lyrical sound. Most of my lessons with him focused on learning different movements from the Bach Cello Suites. Since the register of the bass clarinet is virtually identical to the cello (we actually go a couple notes lower) it wasn’t a stretch to imagine how many of the movements of the suite could sound on the bass clarinet. (For those interested, there is an "easter egg": at one spot I actually use the low B-flat, even though Bach did not write for it, since it’s too low for the cello. I am convinced, however, that if Bach had the low B-flat, he would have used it here. Good luck finding it!)

Flash forward to a few years ago when I bought a new bass clarinet, a Buffet Tosca. Previous bass clarinets I had played all sounded a bit muffled in the upper register, but the Tosca could sing in the upper register like I had never heard before. Since I had spent many years learning different movements of the suites, I decided I would like to record some of them. Around the same time, I had been offered the job on faculty at UCLA. I learned that as a faculty member, one of the perks was to use their extraordinary recording studio, at the fairly new Evelyn and Mo Ostin Music Center in UCLA, and they would hire a professional engineer for the recording. I ended up only recording the 2nd suite there. I soon realized that by setting up my own recording studio at home I had a lot more control over how the recordings would evolve over many different takes.

I was able to find the perfect mic placements (I used 2 Neumann TLM 103 mics and placed them equidistant at a "social distancing" of 6 feet away at around 10 and 2 on a clock and put them consistently in the exact same spots to match what I had done other days.) My colleague from Pacific Symphony, Laszlo Mezo, a cellist and amazing recording engineer helping me pick out the mics and the placement. I credit him as my chief audio engineer, since he did the most editing (Stephen Kaplan did the engineering at UCLA and Lucas Paquette at Parma Recordings did the final mastering. I also did quite a bit of editing myself.)

In addition to recording equipment, what was your setup like during the session?

I’ve been using Vandoren BD5 mouthpieces for the past 5 years or so (On clarinet for even longer.) I have collected dozens of custom-made mouthpieces over the years, but to me, nothing compares to the BD5.

These are the only mouthpieces that give me both depth and warmth in sound and ease of articulation. I found myself getting very fatigued playing on other mouthpieces that gave me a dark sound but the BD5’s allow for a more free-blowing feel without sacrificing the warmth.

I use Vandoren Traditional Blue Box reeds, strength 4. If I need to take them down a bit, I love the Vandoren glass reed stick. It allows me to get exactly the adjustments I need. I use a gold Ishimori ligature, although the Vandoren ligatures are excellent as well.

How did you choose these particular suites from the original six?

Part of it was simply that I was most familiar with these 3 suites over the years learning different movements. The 1st suite is by far the most familiar, so that was a no-brainer. The 2nd suite was the most straight-forward one and works well with breathing and phrasing. I often have my students learn the prelude from the 2nd suite when they are starting off learning them. The 4th suite is in the perfect key for the bass clarinet (concert E flat major = F major for us!) and I loved the sound of the prelude on the bass clarinet. It has an almost pipe-organ quality which translates perfectly to the bass clarinet. Also, the Sarabande from the 4th suite is one of the greatest compositions Bach ever wrote, and it ended up having an ethereal, celestial quality in my arrangement on bass clarinet. At some point, I might try to record the other suites, especially the 3rd suite, which is beautiful. The 5th and 6th suites are wonderful but present some challenges that don’t translate well on the bass clarinet, so I will have to think hard about how to tackle them.

"My 20 + years of experience recording for film and tv here in LA helped me navigate the best approach..." - Joshua Ranz

What are the challenges of recording the Cello Suites on bass clarinet?

The most obvious challenge comes from the fact that the cello can play more than one note at a time (called double and triple stops.) I spent a lot of time listening to recordings of great cellists, taking in how they produce these double and triple stops. Through fairly simple multitrack recording, I was able to simulate the double and triple stops with multitrack recording. My 20 + years of experience recording for film and tv here in LA helped me navigate the best approach to this. I could listen to my solo line and was able to pick up the spots that required adding a sustained note here and there. There was a bit of trial and error, but I got better at it the more I did it.

What do you hope listeners will take away from the album?

I hope listeners can listen to these great works of Bach with a fresh set of ears. Transcriptions of Bach’s music have been performed since his own day. It is easy to forget, when we listen to great recordings and performance of Bach’s music on the piano (Glenn Gould, for example), that the piano we know today did not exist yet (the pianoforte was around in its nascent form near the end of his life, but Bach most likely did not know even know about it). I believe the bass clarinet lends itself better to these suites than almost any other instrument, other than the cello itself. I’ve even had cellists hear certain movements and tell me they prefer the way it sounds on the bass clarinet. That, to me, is the highest of compliments!

Where can we find this arrangement?

As of right now, the arrangements are not useful to the public. I did a short-hand for all of them, since they were only intended to be used for the recording. Now that I am getting interest from more and more clarinetists, I will work on making them legible and probably publishing them.

Most of the movements are quite simple: just adding sustained notes where the cello plays double and triple stops. The most complex were the Sarabande from the 4th suite and the 1st minuet from Suite #2. These actually required some creative planning; for the Eb Sarabande I wanted to create a wash of harmony and melody that both simulated the cello but accentuated the unique, more open sound of the bass clarinet. I am most proud of the way all 3 Sarabandes came out. I was so thrilled when I found out on my release date (April 23rd) that the Sarabande from #1 was featured on the Spotify New Classical Releases Playlist the first week the album was released. That generated a lot streams (about 14,000 to date!)

Listen to the CD

You can find the album on Spotify, Apple Music, Amazon Music and Youtube (just search my name or "Bach Bass Clarinet”)

The physical CD is supposed to be available on Amazon, but it sold out the first day of the release. It appears to be “available” on backorder but may take a month or so to receive, so it would be faster to purchase the CD directly from Naxos. 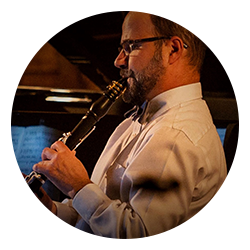 In addition to his performances, Ranz is active in the television and motion picture industry. In August 2020, he was featured prominently playing klezmer style clarinet in the recent release of the film An American Pickle featuring Seth Rogen available on HBO MAX (the soundtrack is available on Spotify, Amazon, and iTunes). Ranz has also played on over 200 soundtracks for John Williams, James Horner, Randy Newman, Alan Silvestri, Jerry Goldsmith, Alexander Desplat, and many others. Some of the films he has played on include Star Wars Episode VII and IX, The Lego Movie 2, Toy Story 4, Men in Black, Ready Player One, and Frozen 2. As a studio musician, Ranz has been featured playing bass clarinet on films such as Catch Me if You Can and The Adventures of Tin-Tin, both by John Williams, La La Land, Christopher Robin, Ladybird, and countless others.