The Vandoren Emerging Artist Competition: Past 2016 Winners Share Their Advice

The Vandoren Emerging Artist Competition started in 2010 as a way to identify the next generation of great clarinetists and saxophonists and acknowledge them for their talent, their work, and the artistry they display on their instrument. The competition is open to any highly proficient saxophonist or clarinetist in jazz or classical between the age of 18 and 23. We touched base with our three winners, Shai Golan, Yoonah Kim, and Aiwen Zhang, and asked them a couple of questions to help you gear up for this year's competition:

When and how did you find out you won the VEA Competition?

Yoonah Kim: I was on my way home from a long day of rehearsing. I had just gotten off the subway when I received a call from the Vandoren studio informing me that I was the first woman to place first in the Vandoren Emerging Artist competition.

Shai Golan: I found out that I won the competition last winter. David Gould gave me a phone call and let me know.

Aiwen Zhang: I discovered I won the VEA competition on my way to the 2016 Navy Band Saxophone Symposium in January. I was elated to receive David Gould’s phone call, and received a warm welcome at the Vandoren booth at the symposium!

How did you prepare for the VEA audition? What did you play?

YK: I played the first movement of Johannes Brahms Eb Sonata, Three Pieces by Stravinsky (which were required) and for a piece of my choice, I chose to play Jörg Widmann's Fantasie for Solo Clarinet. As your readers may know, the VEA competition is an audio only affair--no video. While live performances usually involve a visual component, this competition posed a unique challenge for me to capture the essence of each work through my sound alone. So I believe that my preparation for this competition led me to develop a wider expressive range in my tonal colors.

SG: To prepare for the auditions I just made sure that I knew the 3 tunes I was going to perform as best I can.  I got some friends from my school to help out with the recordings and they all knew those tunes as well.  If I remember correctly, I believe we recorded Embraceable You, Rhythm-n-ing, and My Romance.

AZ: I had known about the VEA competition for a few years, though I never thought to audition for it. I was hesitant to submit tapes at the beginning because it was late in the fall when I decided to do it. However, my professor, Chien-Kwan Lin, encouraged me and guided me through it. I worked really hard and focused on the required repertoire and was able to finish within a month. For the repertoire, I played Sonata by Robert Muczynski, excerpts from concerto by Alexander Glazunov, and select movements from Sonata by William Albright. 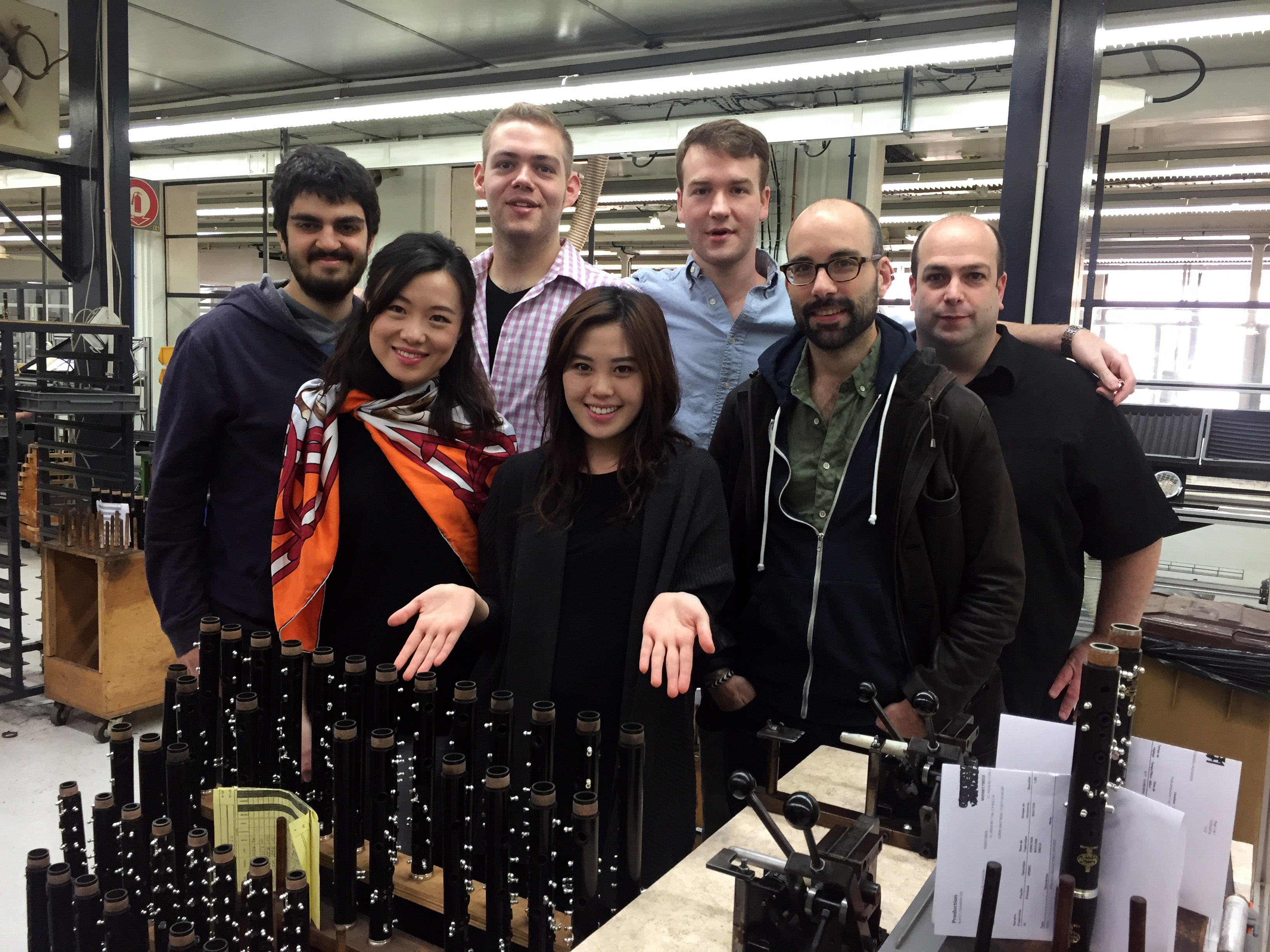 How'd you feel when you found out you won?

YK: I froze in the middle of the street for a good minute. I couldn't believe what I had heard. It's a little embarrassing to say this but I teared up tiny bit. I felt very grateful.

SG: I was very happy to hear that I won, haha.

AZ: To be honest, it was a big surprise, mostly because I knew there were lots of great saxophone players were also competing the VEA competition. I was so happy that I participated and tried my best to put the recordings together. I felt very honored to be the winner of the 2016 VEA competition.

What did you do to prepare for the VEA performance?

YK: I premiered the Pocket Concerto by Dag Gabrielsen at the Music for All festival in Indianapolis. In preparation, I studied the score and was in contact with the composer via e-mail with questions regarding the piece. The piece had unusual and challenging notations that needed creativity by the performer. Unlike the competition, which relied solely on expression through sound, this work calls for dramatic acting as well as virtuosic playing. There were also big theatrical aspects in the piece such as "look into the bell of the clarinet looking annoyed with the instrument." The theatrical aspect of the piece allowed me to have some of my practice time away from the instrument but in front of a mirror. I knew that in order to make this piece really come through, the players were supposed to exaggerate the "acting" aspects. I loved performing this piece so much that I played it again in my recital in May.

SG: I just picked a big band arrangement with an alto feature that I really liked but never got a chance to play.  I chose Oliver Nelson's arrangement of I Remember Bird.  I memorized the chart before I got the rehearsal just to speed things up.

AZ: I contacted Mr. Jonathan Ragonese, the composer of the piece that I premiered in Indianapolis. He sent me the score and gave me some information about the piece. The title of the piece was Non-poem 2. It was written for alto saxophone, piano, violin and cello. When I was preparing this piece, I was trying to follow Ragonese’s program notes and create “a world in which the saxophone might be given the chance to roam free and sing softly through an ever-changing palette.” When I got to Indianapolis, I was able to meet Mr. Ragonese and the other musicians and work with them. They were very professional and it was such a great experience working with them. 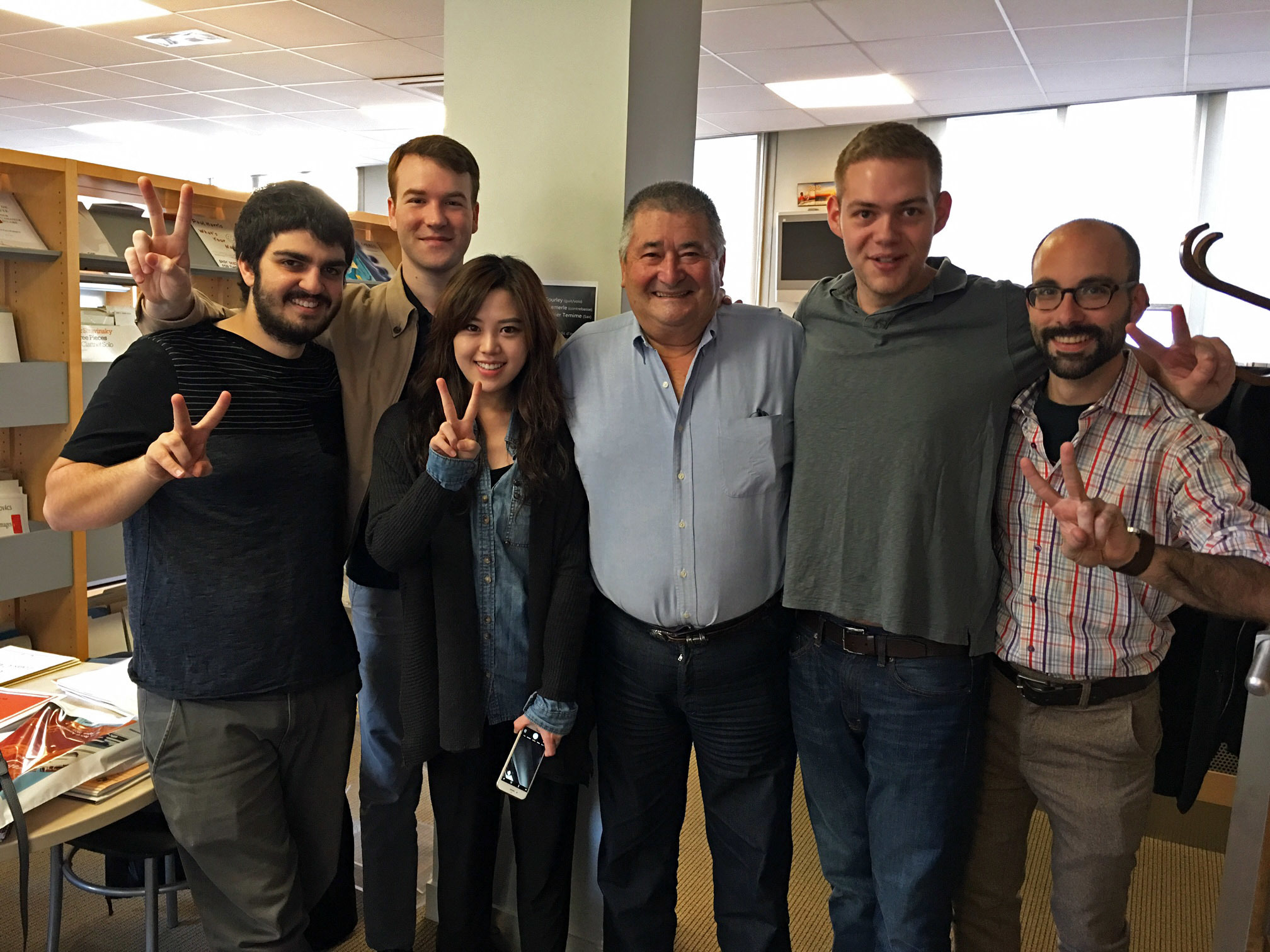 The man himself: President of Vandoren, Bernard Van Doren

Do you have any advice for people applying to VEA this year?

YK: I would advise future applicants to select repertoire that they are very passionate about and is close to their heart.

SG: People want to hear you play musically. Every time you play, make it as authentic as possible.  It doesn't take much to hear whether a performer is trying to impress you with their playing or if they are playing to create beautiful music.

AZ: They made the right decision! I learned so much from preparing for this competition. I would suggest them to use the highest quality recording device they can get their hands on... In my opinion, for a competition like this, every detail matters. Due to the major quantities of recordings that the VEA competition gets, high quality recordings would always give the judges good first impression. Of course your tapes should be of your very best playing.

What was your favorite moment of the VEA experience?

YK: Finding out that I won! And, finally meeting the composer, Dag Gabrielsen, after weeks of pouring over his score. I loved getting to know and collaborating with other adventurous musicians to perform Dag's piece. I had an amazing time in Indianapolis.

SG: Meeting and playing with Steve Wilson was the highlight of my VEA experience so far.

AZ: My favorite moment was when I premiered Non-poem 2 by Jonathan Ragonese in Indianapolis. I was very honored to be able to work with Mr. Ragonese on his piece, and I had lots of fun meeting the talented musicians who were winners from other categories. I am very excited for out trip to France on September 30th.

2016 1st Prize Classical Clarinet, Clarinetist Yoonah Kim is pursuing her Master of Music degree at The Juilliard School, studying under the world-renowned clarinetist, Charles Neidich. Ms. Kim is a recipient of the Irene Diamond Scholarship at The Juilliard School, and holds a Bachelor of Music degree from Mannes College The New School for Music. As principal clarinetist in the Juilliard and Mannes Orchestra, she performed in prestigious venues such as Carnegie Hall, David Geffen Hall, Alice Tully, and Symphony Space. She was a finalist in the Mannes Concerto Competition in 2013 and was awarded honorable mention in the 2014 Concerto Competition. Ms. Kim has also served as principal clarinetist of the New York Youth Symphony and Vancouver Youth Symphony Orchestra where she appeared in the closing ceremony of the Vancouver Winter Olympics 2010. As winner of the Vancouver Youth Symphony Concerto Competition in 2008 and 2010, she was featured as soloist and performed C.M Von Weber’s Concertino and Concerto no.1 in f minor, at the Queen Elizabeth Theater and Michael J Fox Theater in Vancouver, British Columbia. She attended the Sarasota Music Festival in 2015 where her group was featured on the Sarasota Radio. She also attended The Banff Centre Music Festival in 2014 and Caroga Lake Music Festival the same year. Ms. Kim is also active in chamber music. Her piano trio, Suo Trio, performed at the Kumho Art Hall and Sejong Chamber Art Hall in Seoul, Korea.

2016 1st Prize Jazz, Shai Golan is an Israeli saxophonist currently residing in New York.  Shai started his musical endeavors on piano, and then switched to clarinet followed by the saxophone once he moved to California at 10 years old.  A distinguished young artist, Shai has performed with Benny Golson, David Liebman, David Binney, John Daversa, the CBDA All-California Jazz Band, the SCSBOA Jazz Band, the LAUSD Jazz Band, the CSUN Jazz Band,  the MSM Jazz Philharmonic, the Tom Kubis Big Band, and many more.  Shai is currently working on his Master's Degree in Jazz Arts at the Manhattan School of Music.  He graduated with a Bachelor's Degree in Jazz Performance from California State University Northridge in May, 2015.  Shai plans on pursuing a Doctorate Degree in Jazz Pedagogy to become a professor in a collegiate music program.

2016 1st Prize Classical Saxophone, Aiwen Zhang was born in Hangzhou, China. She is currently an undergraduate student at the Eastman School of Music in Rochester, New York, in the studio of Dr. Chien-Kwan Lin. She is also a member of the Eastman Wind Ensemble which is directed by Dr. Mark Scatterday, the Eastman Saxophone project, which gave its Kennedy Center debut in April 2015, under the direction of Dr. Chien-Kwan Lin, and “Jolokia” Saxophone Quartet. She began her musical studies on clarinet at the age of ten. At the age of twelve, Zhang found her passion playing classical saxophone. Zhang received her high school diploma at the High School Affiliated to Shanghai Conservatory of Music (2011). She had Yuanxiang Zeng, Rende Zheng and Xiaolu Zhang as her primary teachers in China. Zhang moved to Bowling Green, Ohio in 2011 and started her Bachelor of Music in Saxophone Performance with Distinguished Artist Professor Dr. John Sampen. She was the first chair saxophone of Bowling Green Wind Symphony.

Zhang has performed in several accomplished quartets. In 2012, Zhang’ss quartet “Four Corners” placed first in the MTNA competition in Ohio State, and received second prize in the Douglas Wayland Chamber Music Competition with “Sidu” saxophone quartet in 2013. In addition to chamber music competitions, Zhang has won many solo competitions, including the second prize as a soloist of the Lima Symphony Young Artist Competition in 2013 and first prize in the 47th Annual BGSU Concerto Competitions in Music Performance. In 2015, she received the first prize of the national WDAV Young Chamber Musicians Competition with Farrago 4 Saxophone Quartet. In 2013, she had her debut solo concert in Hangzhou, China with the Zhejiang Symphony Orchestra under the highly-acclaimed conductor Xiaoou Zhao. She also performed with the Bowling Green Philharmonia  as a soloist in February, 2014. She has also performed in masterclasses around the world with renowned teachers Claude Delangle, Vincent David, Timothy McAllister, Arno Bornkamp, Otis Murphy, Kenneth Tse, Masataka Hirano and Habanera Quartet.

*Both the 2015 and 2016 winners of the VEA competition had a combined trip to Paris, France.

It's not too late to have an incredible experience. Enter the competition. http://veacompetition.com/