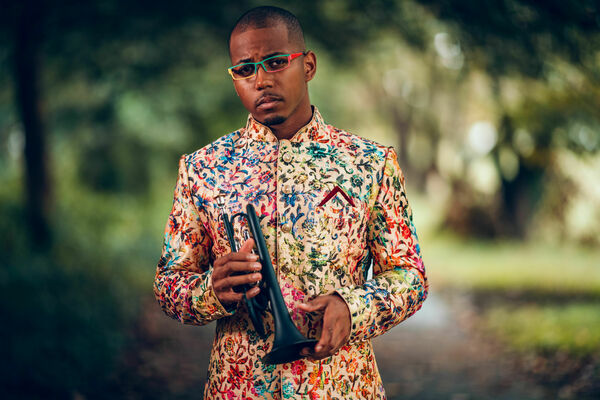 Victor Haskins is a human with a passion for living and learning. Victor Haskins is also a multi-instrumentalist, multidisciplinary artist, international performer, composer, improviser, bandleader, and educator.

Some highlights from Mr. Haskins’ career thus far include winning a grant from the CultureWorks Richmond Grant Program and subsequently performing his creation funded by this work, Be/Flow, with his ImproviStory concept at 1708 Gallery in Richmond, VA in August of 2020.  He was also selected to present an original, multidisciplinary work in November 2019 for 1708 Gallery’s large-scale, light-based art installation, Inlight.  The work, entitled Chimborazo, in Every Sense of the Name (1865-1866), is an exploration of the (true) story of Chimborazo as a refugee camp for newly-freed African-Americans in 1865, and the conditions which precipitated the camp’s demise in 1866.  Haskins was also commissioned by the Anne Arundel County Public Schools (AACPS) Performing & Visual Arts Magnet Program to create an original, multidisciplinary work for their teacher professional-development seminar in August of 2019. His creation, entitled "The American Way", examines lynching of African-Americans in post-Civil War America in relation to killings of African-Americans at the hands of police in the modern era. Other notable accomplishments include the release of his second album of original compositions (which features his ensemble, Victor Haskins' “Skein”), entitled Showing Up, in February of 2019.  Haskins' most recent project for the “Skein” involves a series of compositions he has composed based on his interpretations of rhythms from the Afro-Brazilian religion Candomblé, which he learned while visiting Salvador, Bahia, Brazil and studying atabaque drumming.

As an educator, Victor directs the In-School Jazz Ensembles for the John F. Kennedy Center for the Performing Arts, and teaches Jazz Trumpet, Improvisation, and the Jazz Ensemble at the College of William & Mary. Previously, he served on the faculty of the inaugural Izmir International Jazz Camp in Izmir, Turkey. Haskins has given educational presentations at institutions including (but not limited to) the Anne Arundel County Public Schools Performing & Visual Arts Magnet Program, the Jazz Education Network Conference, the University of Georgia, Virginia Commonwealth University, the Royal Academy of Music (England), Conservatoir Nadia et Lili Boulanger (France), the University of Richmond, TEDxVCU, and TEDxLizardCreek.

Victor holds a Jazz Studies/Performance degree from Virginia Commonwealth University where he completed the 4-year music program in only 3 years (the first and only person to ever accomplish this feat).

Victor is proud to be sponsored by Denis Wick mouthpieces and  Eclipse Trumpets.

Find out more about Victor: