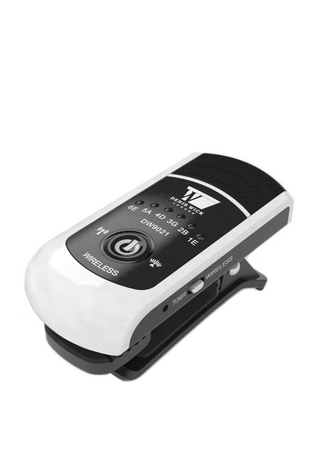 The Denis Wick Wireless Pick-Up allows musicians to check on the tuning of their instrument in noisy conditions, or even in performances, by wirelessly transmitting a
signal from their instrument to a small receiver plugged into a tuner. By using the DW9021 only your sound is transmitted to the tuner, allowing you to tune accurately and efficiently.

The extremely discreet and unobtrusive transmitter clips on to the instrument and monitors the vibrations of the instrument. It is not a microphone, so it does not react to ambient sounds, only to the pitch that the instrument is playing. It transmits this information using Bluetooth-type technology to a receiver. The receiver is attached to a jack plug which plugs into a the Denis Wick tuner, or any other tuner that has a socket for a jack plug, providing pinpoint accuracy.

The wireless pick-up has a big advantage over clip-on tuners; it can be clipped to any part of the instrument and still work. Ordinary clip-on tuners have to be clearly visible. This is easy on the trumpet, cornet or trombone, but very difficult on the euphonium or tuba, where there is no convenient place where the tuner can be easily seen without going cross-eyed. By use of the wireless pick-up, the tuner can be conveniently placed on the music stand, where it can be used very discreetly.

For instance, if you are picking up a cold instrument when doubling on another instrument, this allows you to inconspicuously test a few notes for tuning before you play, allowing you to make any necessary adjustments to the tuning slide. Or if you have a solo entry after a long period of not playing, this device allows you to check your tuning by playing some notes along with a tutti section. This can be useful for solos such as ‘The Trumpet shall Sound’ in Handel’s ‘Messiah’, which comes after a many tacet movements for the trumpet player.

This device is highly recommended to all advanced players who need an accurate reference for their tuning in practice, rehearsal and performance.