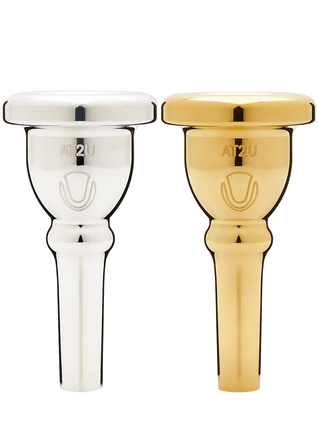 Designed with world renowned tuba artist, Aaron Tindall, Denis Wick is proud to introduce the Aaron Tindall signature Tuba Mouthpiece series. As described by Aaron Tindall, the new line is designed to provide an increased sense of improved articulation, intonation, greater endurance, and significantly enhanced power in both the high and low registers. Along with these comes an ease of playing accompanied by a richer, broader, and truer sound that we believe is currently unmatched by many of the other competitors in today’s market.

AT1U is a very large funnel styled mouthpiece with straighter walls into the cup, and has a very large throat diameter at 9.53mm.

AT2U is a large funnel/bowl mixed style cup with the same large throat at 9.53 mm.

AT3U is a Helleberg styled mouthpiece that offers a real ease of playing in all registers on the contrabass tuba.

AT4U is a Geib styled mouthpiece, and is ideal for rotor CC tubas and those looking to add an extra element of upper overtones to their playing.

AT5U is a large F tuba mouthpiece very similar in design to the AT2U but w a smaller throat/tighter backbore.