A Beginner's Guide to Mouthpiece Anatomy

Mouthpieces are the binding factor between us as brass players and our beloved instruments. A mouthpiece that suits a player well can make all the difference in being comfortable and achieving optimal performance when the horn is up to a player’s face. Having an appropriate mouthpiece for the individual player is also critical for growth as a performing musician. Playing on a mouthpiece that doesn’t line up with the individual’s unique anatomy such as their teeth structure, lip size, jaw alignment, as well as countless other factors can have an adverse effect when playing a brass instrument.

To play on a mouthpiece that’s right for you, it’s important to be familiar with the four main components of a brass instrument mouthpiece. These four components include the rim, cup, throat, and backbore. Knowing how these components function individually, and together, is crucial when considering the perfect mouthpiece capable of fulfilling your needs.

The rim is where “the tire meets the pavement.” In other words, the connection between the lips and this part of the mouthpiece is critical due to its direct contact with your embouchure. Some players enjoy having the same rim feel no matter what type of playing they may be doing, while other players prefer a different feel when addressing different styles of music. Although some brass players are devout with their schools of thought, it all depends on personal preference and what works for the player.

Generally, rim shapes are categorized as “flat” or “rounded,” each containing their own pros and cons. Many brass players tend to find a happy medium in a rim that combines flat and round characteristics as well as the correct diameter that suits their unique anatomy. Although there are no absolutes when it comes to certain characteristics of a rim, quite often it is found that a flat rim provides pressure evenly on the given player’s lips. In addition, they are considered comfortable and can aid in endurance when playing. One drawback to this is the lack of flexibility offered by the flat rim. On the other hand, a round rim offers a great deal of flexibility to the player but will also require more lip strength and air pressure when playing.

Width is equally important when examining the rim of a mouthpiece. A smaller rim width provides less lip support whereas a larger width allows more lip support. Most instances are subjective when it comes to a mouthpiece’s rim and it is recommended to try a multitude of different rims to find the perfect fit for your playing needs.

The cup is the resonating chamber of the mouthpiece that determines how much of the lip will be able to vibrate. Its diameter has an important effect since it determines how much physical volume this component will have. With a larger diameter, more area of the lip will be allowed to vibrate. This attribute can also have a major influence on the player’s sound. In discussing the cup, common descriptions for the depth are shallow (or small) and deep (or large). Some benefits of a shallow cup include more overall control along with a brighter tone. On the other end of the spectrum, a deep cup will produce a darker tone color. Maximum control is required for playing on a mouthpiece with a deep cup. A smaller mouthpiece cup will most often require less effort or exertion from the player.

Effecting how the air enters the mouthpiece, the throat is an overlooked aspect of a brass mouthpiece, making it a lesser known component. It is important to note that this component is the smallest point a player’s air and sound will pass through, having a profound effect on sound and sensation. Among the variances in throat, the results are similar to that of the cup. A larger throat may promote a bigger sound and less backpressure while providing more of an open sensation. A smaller throat will provide more backpressure and can suffocate the sound, however it also may prevent a player from overblowing or “falling in” to the mouthpiece, as well as provide support for higher register playing. Both options can be very useful and, like many aspects when considering equipment, it is all about balance and finding what works for your unique anatomy as well as knowing what is appropriate for your given playing situation. Throats are meant to compliment the cup and backbore combination and can make or break a player’s equipment setup, which is why it is important to understand them.

The backbore portion is the inner component that effects how the player’s air moves from the mouthpiece to the instrument’s leadpipe. This section starts from the throat and expands to the end of the shank. Combined with an appropriate throat, the proper combination can give a player the exact feel and sound they desire. Like a mouthpiece’s cup, the backbore has a large involvement in the quality of sound produced. The shape will also affect how your sound projects. For instance; Denis Wick offers three different types of shank contours: V-Type; a very focused projection, Barrel; a more open projection, and V-Barrel; which is a combination of the two. Another way to perceive differences in backbores would be that a large, or “open”, backbore provides greater emphasis in the lower harmonics of a given instrument whereas a smaller, or “tighter”, backbore generally supplies more resistance and will magnify the upper harmonics. As stated before, it is necessary to find the right balance. 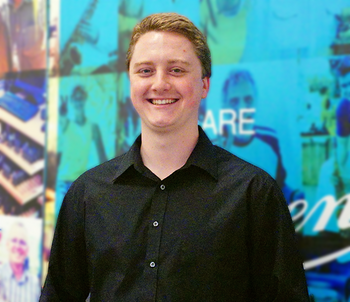 Growing up and living in the Western New York/Buffalo area, John R. Hylkema has a Bachelors of Music degree in Music Business from the Crane Institute for Music Business and Entrepreneurship at SUNY Potsdam.

John has traveled with the American Music Abroad Empire Tour band and performed concerts in Austria, Germany, Luxembourg, Switzerland, and France and has had the honor of performing taps during the D-Day memorial site’s flag lowering ceremony at Omaha Beach in Normandy, France. As a lifelong lover of the music products industry, John aspires to work for a musical instrument manufacturer designing and repairing instruments.

Watching Buffalo Bills football and Buffalo Sabres hockey games are among some of John’s favorite things to do, along with traveling, camping, and hiking. He is also a lover of dogs as well as an avid Ole Miss Rebels fan when he isn’t busy drooling over cars or anything with a motor. During the summer, John can be found boating, fishing, and kayaking. Go Bills, Sabres, and Rebels!

Get the weekly Buzz, as well as a library of recordings, clinics, podcasts, videos, and product information.