Who Is Denis Wick?

The man behind the world's best mouthpieces and mutes

Denis Wick has had for many years an international reputation as trombonist, brass teacher, and conductor. Having studied in London at the Royal Academy of Music, his first professional appointment was in the Bournemouth Symphony Orchestra as the second trombonist. He became principal trombonist of the City of Birmingham Symphony Orchestra in 1952, leaving in 1957 to join the London Symphony Orchestra, also as principal trombonist, and remained there until his retirement in 1988. During his time with the London Symphony, which eventually became the longest tenure of a principal chair in the history of the orchestra, he played under many of the world’s greatest conductors.  Denis recorded on numerous movie soundtracks with the orchestra, including Star Wars Episode VI: Return of the Jedi, Indiana Jones and the Raiders of the Lost Arc, and Superman

Despite the demanding schedule of the LSO, Denis has also been a member of the London Sinfonietta and, for a short period, the Philip Jones Brass Ensemble. In addition, he has made many appearances as a soloist. He has had concertos written for him by several British composers; among them, Gordon Jacob, Buxton Orr and Alun Hoddinott. 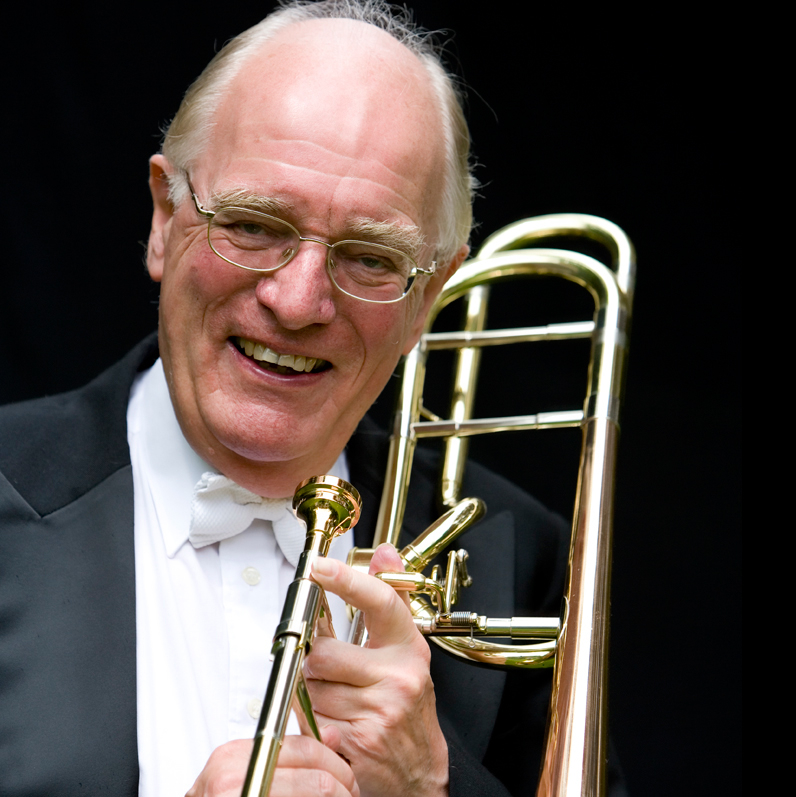 Denis Wick is perhaps best known for his line of brass instrument mouthpieces and mutes. 47 years ago in 1968 Denis started making mutes and mouthpieces, and the company has grown over the years and now employs 22 people in their Hamworthy factory. The company’s products are well-known amongst brass players across the world and are recognized as being some of the best-designed and highest quality accessories on the market.

His conducting work began at the Guildhall School in the 1960s and has naturally been centered on brass and wind ensembles. It also included for many years an excellent youth symphony orchestra which has bred generations of professional players. His own London Wind Orchestra made prize-winning recordings in the 1970s which have set new standards of excellence for this kind of ensemble.

Denis has been involved in music education for many years; having been appointed professor of trombone at the Guildhall School of Music and Drama in 1967, he taught there regularly until 1976, continuing to work as a consultant professor and conductor since that time. Many of today’s finest professionals studied with him; his intensely musical yet very practical approach to teaching is widely respected.

Wick’s textbook, Trombone Technique, is now in its fifth edition and is used worldwide as the most important publication of its kind, with translations available in Japanese, German, Swedish, and Italian. In 1989, he received the International Trombone Association Award and in 1990 was elected Second Vice President in charge of international affairs. From 1992 – 1995 he served as president of the British Trombone Society.

Get the weekly Buzz blog, This Is You podcast, as well as our library of recordings, clinics, podcasts, videos, and product information.

How It’s Made: Denis Wick Mouthpieces